Buy the books in amazing print form from lulu.com, complete with awesome bonus features and pages made of real paper! 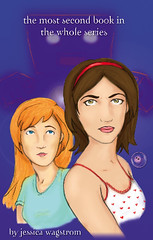 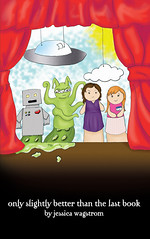 The Most Popular Book in the Whole World (and sequels) by Jessica Wagstrom is licensed under a Creative Commons Attribution-Noncommercial 3.0 United States License.
Based on a work at xlormp.livejournal.com.
Permissions beyond the scope of this license may be available at http://xlormp.livejournal.com/.

Note: The CC License on this stuff has been changed slightly, it is no longer "no derivatives" as I encourage fanart and whatever you feel in your heart like making based on this story. All I ask is that you don't sell it. :)

WHO STILL READS THIS THING HOLY HELL, IF YOU DO, HI. I'M PRETTY EXCITED ABOUT THIS. I'M NOT MAKING ANY SPECIFIC PROMISES BUT NANOWRIMO IS NEXT MONTH AND I'M GETTING A COPY OF THIS BOOK TOMORROW. 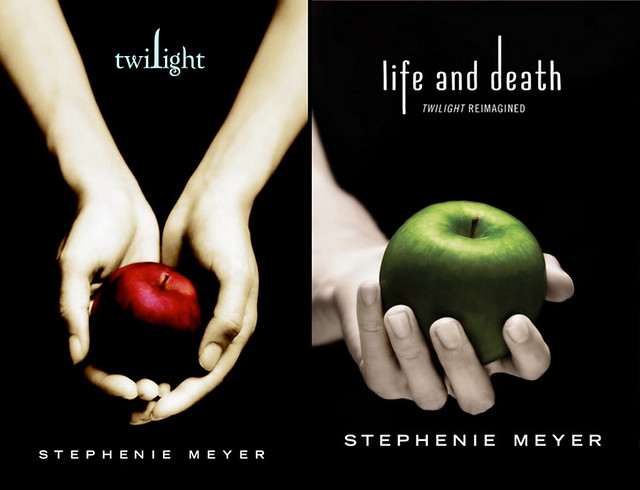 Hey guys! I'm not sure how many of you know about or follow the phenomenon that is LJ Idol, but basically, it's a writing competition where people get voted off every week, much like a reality show. Fools and masochists enter to get their hopes and dreams crushed.

I'm participating in a mini-season that's currently in the third week. This week I wrote about boobs, but I guess there's no pleasing some people because so far I don't appear to be getting as many votes as weeks past. Anyway, should you be bored and logged in and enjoy filling out polls, I'm participating under my regular lj name,

kandigurl. The poll is here and the deadline for voting is Monday at 8 PM EST.

If you actually want to read what you're voting for, the entry I posted this week is here.

And I'm kinda trying to write sections of a longer YA piece with each entry, so if you want to know what else has happened thus far (which isn't necessary for understanding this week's entry, as I'm attempting to make each piece stand on its own), week one's entry is here and week two is here.

Have any of you guys ever done LJ Idol before? How did you fare?

Guys, did Lou ever get a last name? I can't remember.

If you want to join us, feel free! So far, I'm not sure how well it would translate as a continuation of Xlormp and Frig, because we've got the whole courting/first time all over again thing which wouldn't make any sense given that they're space married.

I did a quick, simple edit of The Most Popular Book in the Whole World and sent some query letters to agents.

I've been putting off doing this for a number of reasons. It was just for fun, I don't know if I really want to be an author or whatever, it's blatantly Twilight fanfic (in a mocking sort of way), etc. But the biggest, deepest reason: I didn't think anyone would want it.

It's ridiculous and stupid. It's hard to get into if you aren't feeling Frig's voice right off the bat, even though it does become a legit story later on. And I'm not sure how much of it I'd be willing to change for the sake of a publisher.

But for crap's sake, the reason I wrote it is because I was so mad that Twilight existed, I felt it was my duty to write a better book. Whether or not the Xlormp series actually IS a better work depends on who's reading it (as seen by comments like this), but it's something I would have much preferred to read, and I still love it when I go back and read it myself. Sometimes, I'll open one of the books to a random page, read a random sentence, and laugh about how brilliant I am to myself. (Is that a weird thing to admit? Probably. At least I think my own jokes are funny, right?)

Doing this will most likely eliminate the "following Twilight chapter-by-chapter" format of the original postings.

Here's what I'm afraid of: I'm afraid I'll end up with a three page novel because so much of what I've got written is a parody of the horrific, useless fluff that comprised the first 350 pages of Smeyer's crap book. I'm afraid re-working the book this way might take away some of its innate silliness.

If you're reading this, you probably read along while I wrote these books, and you commented, and inspired me to keep going. I want to make the book something that will stand on its own (while still being completely ridiculous), but I don't want to let down the people that loved it first.

I'm going to try it anyway, because I've always thought of it as its own story and some of my least favorite chapters are the ones I wrote just because there had to be an equivalent to the chapter in That Other Series (all the useless stories in Only Slightly Better Than the Last Book, anyone?). But I figured putting my fears into words might help them look less scary. And it kinda did. :)

Not sure if I'm going to share the edited product online anywhere, but who am I kidding, if I do it, I probably will.

PS: I got my first two rejections today, one of them even complimented the "poise and polish" of my writing! I couldn't tell if he was joking or not.

By the way, guys, I started a group on Facebook if you wanted to come hang out there. I figure the snarking done here will be more Twilight/possible Frig and Xlormp possibilities, and the FB group, more general headdesking.

Welcome, valiant warriors, on the brink of a journey that will surely test your mettle. To those of you willing to join me in this fight, I salute you. To those of you who shan't be reading along with us, but stand on the sidelines to provide moral support, I respect and honor you.

I'm gonna need some support to finish reading it. Would you like to be part of my 50 Shades support group by reading along with me, book-club style? We'll read a few chapters, then bitch about them. If you end up liking the book, you are more than welcome to explain why, and your views will be considered but probably strongly disagreed with. NO PRESSURE.

I'm stuck on chapter three. I read a paragraph and then think of five hundred way more interesting things I could be doing.

A friend of mine wanted to start up a "Horrible Books" book club pretty much specifically for this book, and we were going to read it together, but I think it would be fun to have a BUNCH of us in on this.

Who's in? It'll officially start Monday, I think. So get your books, fire up your Kindles/Nooks/iPads/WhatHaveYou, download your torrents, etc. and have them in your paws by Monday, when I shall issue the first reading assignment.

For now, though, I'd like to bitch about a particular scene in chapter two: Chick works at a hardware store. Dude comes in to presumably stalk her (Edwardish) and buy crap for his sex dungeon. But of course she doesn't KNOW about his wacky sexcapades yet.

And THAT is an example of just some of the fine, intellectual conversation we will have about Fifty Shades of Grey in our book club.

Okay, guys. I'm reading it. From the beginning. Fifty Shades of Grey.

This book is terrible. I'm counting how many times the narrator says "Holy crap!" or some variation thereof.

So...my husband bought Fifty Shades of Grey, and has been reading random passages out loud.

No promises here...but I can totally see this turning into the continued adventures of Frig and Xlormp.

But every freaking sentence is making me headdesk.

ETA: Of course, I'm not sure how I feel about writing graphic and explicit tentacle sex. I've always imagined Frig's just so inexperienced and enamored by Xlormp that they don't actually have sex, though, so it could be entertaining to try to actually describe their bedroom exploits.
Collapse